The BBC programme ‘Woman’s Hour’ yesterday announced its 2020 Power list celebrating 30 inspiring women from the UK whose work is making a significant positive contribution to the environment and the sustainability of our planet.

Several of the women are nationally acknowledged leaders in their field, but inevitably some are better known than others.  The diversity of age, ethnicity and the area of contribution is striking.

Throughout this week Woman’s Hour (10 am Radio 4) is featuring the women; you can also download a podcast if you miss anything.  Meanwhile the full list is published here.

On 28 September 2020, along with 76 other national leaders, Boris Johnson signed a 10 point ‘Pledge for Nature’ ahead of the UN Summit on Biodiversity ‘to send a united signal to step up global ambition for biodiversity and to commit to matching our collective ambition for nature, climate and people with the scale of the crisis at hand.’

Now Martin Harper of the RSPB has published an assessment of  how the government is doing so far with regard to these ten points.  You can read his excellent blog here.

We were sent this from Jenny Langley, our recent speaker on Extinction Rebellion:

The Stop Ecocide Foundation would be really good for your group to know about.
https://www.stopecocide.earth/
They are trying to make ecocide an international crime through the UN – on a similar basis to genocide.  They are making progress. Greta gave them £100,000 of the £1M prize she was awarded recently.
You can sign up to be an Earth Protector (5 euros), make a donation or just spread the word. If for no other reason, do it in memory of Polly Higgins, an amazing barrister who left her career to make this happen and she died young from cancer in April 2019.
This is a worthy cause for us to support.  As Polly Higgins said
“The rules of our world are laws, and they can be changed. Laws can restrict or they can enable. What matters is what they serve. Many of the laws in our world serve property – they are based on ownership. But imagine a law that has a higher moral authority… a law that puts people and planet first. Imagine a law that starts from first do no harm, that stops this dangerous game and takes us to a place of safety….”
Polly Higgins, 2015

Cambridge XR members Jenny and Derek Langley talked to us about Extinction Rebellion and answered questions.  They stressed the need to act now on the threats to life on earth; the usual democratic means (via Parliament, petitions, letters, demonstrations etc) are not working quickly enough.

(LW: this is a personal take on what was said: to see a full list of XR principles and values visit their website)

Afterwards Jenny sent us the following information and follow-up links:

Science/Info about Climate and Ecological Crisis

Science and biodiversity loss – there is loads online and I’d point you towards the XR ‘Heading for Extinction and what to do about it’ (Larch Maxey talk on YouTube).

Absolute Zero. A collaborative research programme led by Julian Allwood, Professor of Engineering and the Environment at Cambridge, aims to cut the UK’s emissions by 2050 by placing resource efficiency at the heart of future industrial strategy. Very good on practical aspects of what has to be done to achieve zero carbon by 2050.

Rebellion Academy: (online training and info for lots of roles in XR)

The only regular action that is happening in Cambridge at the moment is Silent Rebellion, a meditative action, online 9.30 and at Christ’s Pieces 11.30 every Saturday, organised by the Buddhist Affinity Group.  They are keen to spread Silent Rebellion – you could start one of your own!

Readers may know that the government is proposing radical changes to planning laws which will mean that individuals, and even councils, will have less opportunity to comment on proposals.

2G3S supporter and planning expert Anthony Cooper wrote a timely letter about this to The Cambridge Independent, much of which we reproduce below:

The government proposes to “speed up” and “streamline” the planning system by replacing it with a new regime altogether.  They believe that the present system is an obstacle to the delivery of new homes. They are mistaken.  There is plenty of land with permission for building already and most applications for planning permission receive consent.  As we rely upon the market to deliver new homes it is the market which determines when and where those new homes are built.  If the market is slow in delivering new homes it is for commercial reasons.

Everyone should be concerned at the way the government proposes to change the planning system.  Although the public will still have a say, albeit a rather limited one in the drawing up of new district plans, the scope of the public to comment on and object to specific planning applications will be severely limited and in some circumstances denied altogether.  Even our elected local representatives could be cut out of the process.  In those cases the first thing a houseowner would know about something going on next door would be the arrival of the builders.

The government is consulting on their ideas and your readers have until the end of this month to make their views known.  The government’s proposals are set out in a White Paper called “Planning for the Future” and can be accessed online here.

Introducing the Bristol-based campaigning group City to Sea , ‘an environmental organisation on a mission to stop plastic pollution.’  They aim to do serious things in a fun way.

At the foot of the main page linked to above you can sign up for their newsletter, which they describe as ‘a monthly dose of optimism’.

There is an increasing awareness that to combat climate change we should be moving away from fossil fuels.  So the oil companies are switching from fuel production to plastic production.  However, this report is not about the ever-expanding petro-chemical industry that is pumping more and more plastic into the world.  Instead it shows how the largest users of plastic such as Coca-Cola, Colgate-Palmolive and Unilever deploy tactics to ensure that they evade accountability for their pollution.

According to Changing Markets Foundation, the investigations found:

2G3S supporter Anthony Cooper has written a timely and very comprehensive paper entitled ‘Planning for Net Zero’ which you can read here.  Note this is a second, revised edition (November 2020) which includes an author’s preface.

Where do we go from here?

Anthony is a retired government legal adviser (Treasury Solicitor’s Dept and Department of Trade & Industry) and  has taken a keen interest in town planning and environmental issues for many years.  He served on the National Committee of CPRE in the 1990s and has been an active member of Cambridge, Past, Present and Future (formerly the Cambridge Preservation Society) for 30 years.  He currently serves on the society’s Planning Committee.

Please note that the views expressed in Anthony’s paper are  personal and do not necessarily represent those of 2G3S as a whole.

If you wish to comment on Anthony’s paper, you can reach him via 2G3S.   Email us at , with the heading ‘Cooper Net Zero paper’.

Solar panels are becoming more and more popular, and are a valuable contribution to our efforts to cut carbon emissions.  But they are difficult to recycle.  With a life-cycle of around 25 years, an increasing number are now reaching the end of their effectiveness.

This article from the American group Ecowatch discusses the issue.

Plastic Wars – Another View on Single Use Plastics 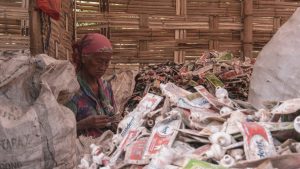 Since then, a new film has been released, ‘Plastic Wars’.  In some respects it is a better report; shorter, slightly less pessimistic, more focused on the root cause, and readily available on YouTube

Plastic Wars looks specifically at the motivation and tactics of the petrochemical industry over the past forty years.  As renewable energy sources become more available, the industry is looking to switch uses of its raw materials, oil and gas, to the production of plastics.

In the 1980’s the first public awareness of the problem of plastics waste began, and some US states threatened to ban plastic packaging.  The industry’s response was:

1 was successful if unhelpful; 2 was a blind alley already secretly acknowledged by the industry.  Sorting by chemical type was successfully prototyped in the 1990’s then abandoned, as only the plastic in plastic bottles had any commercial value, the other 90% ending up in landfill.  Why this should be was not fully explained.  Partly, packaging manufacturers were producing products made of multiple types of plastic which could not be separated, but one suspects that the petrochemical industry was also undercutting the price of recycled raw materials.

At that time, plastic identification symbols were put on packaging, but this was simply a public relations ploy to give people some confidence in the recycling process.

Exporting waste to the Far East for processing has only exacerbated the problem of unregulated dumping, especially since China closed the door to imports and trade switched to countries with more lax regulations.  The overspill is now finding its way into the oceans in a big way.

Once again the petrochemical industry is promoting recycling while at the same time engaging in a massive plastics manufacturing investment, which makes no sense if recycling was a viable option.

While both films point to the petrochemical industry as the problem, they tend to take the line that this is the only point where pressure can be applied.  They recognise that the whole industry is a supply chain of many players, raw materials producers, packaging manufacturers, packaging users, packaged products retailers, consumers, waste collection and (the missing link) waste re-processers feeding back to the packaging manufacturers.  If this was working properly, the petrochemical industry would only be topping up any raw materials lost in the process.

However, as with any supply chain, the law of supply and demand applies.  If restrictions are applied at any point, by regulation or public demand, all stages of the process should be similarly restricted.  We as consumers have the power to let the shops know what we think, by complaining or just not buying.

Also, be aware of industry hype from those whose only interest is selling oil.  As with most big corporate organisations, the need for self-preservation will outweigh any moral or communal duty.